ATTACK OF THE GIANT LEECHES

ATTACK OF THE GIANT LEECHES: A SUCKER’S LOVE STORY

Here is what I have to say about what possibly is THE BEST leech flick ever made in the 50’s. 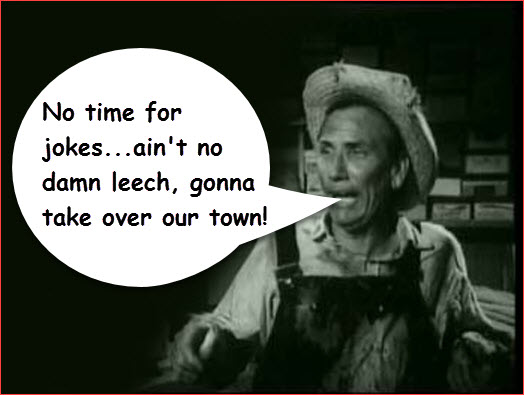 Moonshine, shotguns, swamps, dynamite, and a mosquito-synth style musical soundtrack cling together an incredible combination which develops into a completely leech-driven motion picture masterpiece. Starting with the opening scene (if you could actually see your way through all of the fuzz particles and scratches on the film leader), town drunk and hallucinogen expert, Lem Sawyer, stares his blood-shot eyeballs onto the trail of something that just wanted to be left alone. Not really sure of what was squirming in the midnight swamp just in front of him, Lem pounded about a half dozen rounds of shotgun ammo into what later is realized as being just a REALLY BIG GIANT LEECH! 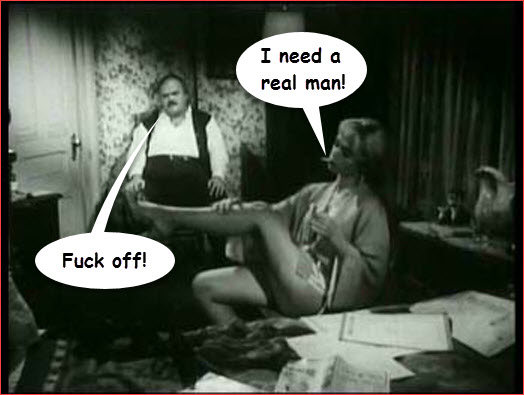 "A very frustrated Dave, lusts over the wife he can't touch!"

Not far behind now, we find ourselves at big 'ole Dave Walker’s general store/whiskey a go-go. This is the very location where Lem was criticized for his prior poor visual judgment in claiming there was a suction-cupped beast on the swamp prowl. Within the walls of this general store, we find Dave's lushish wife Liz, giving him all he can handle. Dave, a known softee, only wanted to love his wife the best he could. He couldn’t, however, seem to give 'da girl what she was craving. A quote by Dave, reading as "I Love You Liz Baby," was only forcefully shredded to the curbside by Liz's comeback line of, "Get Out You Fat Pig." The couple obviously had their differences. To make matters even less attractive for big 'ole Dave, Liz was actually cheating on him with another fellow by the name of Cal.

"Leech tentacles aren't the only penetration in this film,...and Dave can 100% vouch for that!"

Ahhh, heck with it. Let's just get to the death count, shall we: our faithful drunk Lem, finally meets his maker as he gets sucked to death by a leech in what may have been the bloodiest scene of the flick. Liz and her 4-play triangle lover Cal get plunged into the bayou, and Dave eventually hangs himself while rotting in a jail cell. Also, during an edge-of-your-seat swamp search, two more canoe paddling red-neck whiskey guzzlers capsized into the clutches of the plasma hungry GIANT LEECHES. 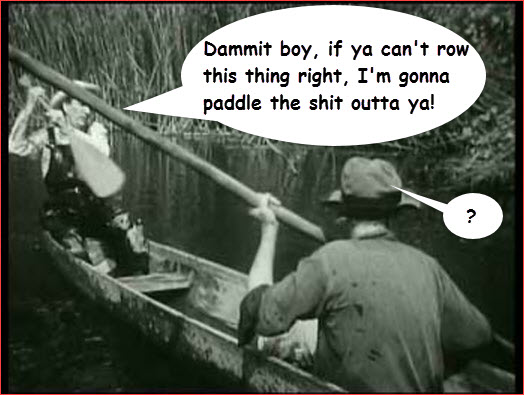 "During the process of leech hunting, it's not uncommon to see a redneck oar-fight!"

To make a short story even shorter, as the death toll stands, the body bag count is only a mere 6-- (not the greatest, but it will have to do, I guess). And that’s including the lickable Liz, which at the end of the flick, makes it very unclear if she was pronounced dead or not. The ending scene is TOTAL DYNAMITE, quite literally. A high-tech explosive assemblage was developed as the main source for putting a tearful end to our flesh slurping blood suckers. 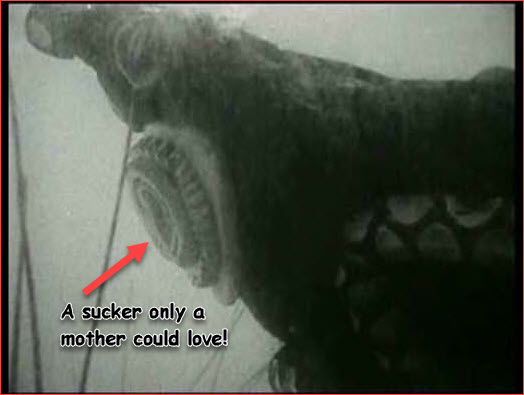